It's a good morning.

My wife is back in town, and me little heart is happy.

As with most mornings, the Daily Lectionary ... the Bible ... you know, THE BIBLE ... which I've studied for most of my life, taught to so many, and from which I've preached endless sermons, some of which were even pretty darn good. Ha! 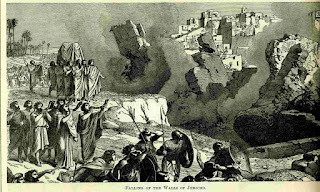 But, as of late, I'm reading with careful eyes ... and things are hitting me hard ... like this morning's piece from Joshua, with Jericho in ruins, and Joshua says: Take all the valuables, the gold, silver and bronze, and we'll put them into the LORD's treasury, but as for everything else, everyone else, man, woman and child, dogs and cats, cows and goats, devoted [what a word to use] for destruction. Death, m'boys, death; carnage and destruction, kill 'em all ... they don't deserve life; their land is our land. Preserve Rahab and her family; she helped us. But as for the rest, kill' em. As for the city, burn it. As for the future, cursed be anyone who tries to rebuild it.

Oh dear, what can I say?

There was a time when I would have said: Blood and terror, but such were the times.

These days, I simply say, Blood and terror ... and horrible and hideous ... yes, this happens; this is what nations do to one another; and every nation says that it's their god who commands it, who commends them for it; a god of unrelenting violence who finds blood rather tasty. And for those who care at all about this earth, about life, a word of rejection is needed here. A word that puts material like this into a museum, into a display of sadness, titled, this is what people do when they misconceive god.

Sadder, still, what this bloody business engenders in many who read it ... the Puritans and early Americans who saw the Indigenous Peoples as Israel looked upon the citizens of Jericho ... and down through the ages, as European Christians colonized the world, wiping out tens of thousands of people in a heartbeat, if not by sword, then by disease, and enslaving millions, devoting to a life of unrelenting cruelty and sorrow. Yuppers! The LORD is on our side, and the sword is the way of the LORD.


I'll not do a Thomas Jefferson on the Bible, with cut and paste ... to make it more "sanitary" and pleasing. No, this is part of the Sacred Text, it's there, and I have to deal with it.

But no longer will I offer justification for it, or try to make it a metaphor, or allegory, or anything like that No, not at all.

It's just horrible, hideous, miserable and unworthy of the Creator of the World. That ancient Israel should conceive of itself in this kind of blood, and by the sword is not unusual; this is how nations behave. But it's not what God commands or commends!

But that Jews today, and Christians, and anyone else, of whatever creed, who read this for justification of violence and domination, is the greater horror, and the greater crime against God and God's Creation.

It was hard to read today ... I was feeling good, and then this dirty little ditty, if you will ... that the way of the LORD is the way of the sword ... and if Joshua had the temerity to curse those who would try to rebuild the city, perhaps a curse upon those who take up these texts of violence and use them to justify their laws, their guns, their violence, their domination.

But, then, no curse is needed.

Because those who live by the sword die by it. The Bible says that, too, sort of. Whoever wrote that piece (Aeschylus) knew the story, and when Jesus quotes it (he quotes a Greek philosopher, rather than someone from his own religious tradition), he, too, knew the story, better than any of us.

Now is not the time for me to say: the sword is the device of hell, not heaven; that "death to all" is the cry of the demented, and not the Word of the LORD.

For God so loved the world, that God gave ... upon this hangs all the Law and the Prophets ... and by such is how I read the Bible.

Posted by castaway at 5:28 AM No comments: