While the nation was saved from a political cliff with Obama's reelection, defenders of freedom need to pay close attention to what's happening in the States. Conservatives know that it's always easier to pass restrictive legislation on the state rather than the Federal level. For some 40 years, conservatives have been bent on taking over local school boards and state houses; they have largely succeeded in many parts of the nation. People who love freedom, and the great pillar of freedom, public education, need to vigorously reclaim local school boards and state houses.
Posted by castaway at 8:59 AM No comments:

Following the armistice of 1918, American soldiers landed at Archangel, along with British, to defeat the Bolsheviks, restore the White Russians to power, hoping that Russian would again open the Eastern front against the Central Powers. When Lenin finally consolidated the powers of a new Russian government, America withdrew its forces, but not until 174 Americans had died there.

Hiram Johnson, a progressive Republican from California, spoke on the Senate floor, January 29, 1919:

"Why did we enter Russian? I answer, for no very good reason; and we have remained for no reason at all. And what is our policy toward Russian? I answer we have no policy. We have engaged in a miserable misadventure, stultifying our professions, and setting at naught our promises. We have punished no guilty; we have but brought misery and starvation and death to the innocent. We have garnered none of the fruits of the victory of war, but suffer the odium and infamy of undeclared warfare. We have sacrificed our own blood to no purpose, and into American homes have brought sorrow and anguish and suffering."

Substitute Iraq for Russia, and we have another tragic misadventure for which America and the world continue to pay the price.

America then, and now again, is faced with the gravest temptation of Empire - that might makes right, and that we have the right to police the world according to our interests.

It never works; it never will.

Posted by castaway at 8:43 AM No comments:


When enough states approved the 18th Amendment, Billy Sunday declared: "The rain of tears is over. The slums will soon be a memory; we will turn our prisons into factories, our jails into storehouses and corn cribs, our men will walk upright. Now women will smile, children will laugh, hell will be for rent." Savage Peace, Ann Hagedorn, p.50 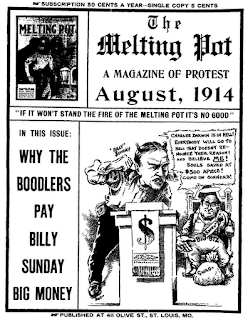 This foolish pronouncement could come only from the lips of a perverse moralist (which Sunday was), attributing to a single cause (alcohol) all that's wrong, and believing that prohibition would usher in a new era, if not heaven itself. Such is the foolishness of moralists, and how wrong they are. Sunday, meanwhile ignored the call of women for suffrage, anti-Semitism, lynchings and the on-going cruelty of Capital and its war against the workers of America.

Can only hope contemporary moralists could learn a lesson from this - to pay attention to the real issues facing America (greed, racism, poverty, jobs, school funding, war, environment, universal health care) rather than the illusory issues of a woman's right to health choice and marriage equality for LGBTQ persons.

Posted by castaway at 3:07 PM No comments:

Fundamentalists of various sorts - Protestant and Roman Catholic - who oppose abortion continue to stumble over the most effective means for lowering abortion statistics - contraception.

As was heard from Paul Ryan on the Roman side of things, and from various and sundry pro-birth folks who are mostly on the Protestant/evangelical side of things, contraception is itself an evil, a contradiction of god's plan and purpose for women and their wombs!

Which leads me to the conclusion: the various voices that oppose both abortion and contraception are simply pro-birth - no matter what, no matter where - a pregnant woman must carry to term her child, and if that child should, in some way or other, threaten the mother's life, as we recently saw in Ireland, too bad!

"Mama, you have to die, here and now. Your life is of no further value. It's the life of the fetus, the child, and the birth-process, that now trumps any claims you might have to life. Sorry about that. Well, actually, we're not sorry. You should have kept your legs crossed! Shame on you. Such a slut you are!"

The fundamentalist dilemma - what to do?

Everyone knows that laws prohibiting abortion will simply drive it underground, and, of course, the wealthy will always have access to it, for they can pay their way around any and all laws. Or, if they choose for little Susie to have a child, they have the means to pay for it, what with nannies and various care-givers ... or give the child up for adoption through an expensive attorney who will quietly make all the arrangements for another family of means to have a child.

There is simple solution: contraception.

But we've seen a growing of number of Protestants join their Roman Catholics sisters and brothers in opposing contraception.

I, for one, have never understood this.

That's like saying, "If you get an appendicitis, don't remove it ... suffer through it. It's god's will for you."

This kind of thinking makes a fetish out of the body, especially the female body, as if the body itself, and its many functions, is sacred and out of bounds. Which is about as silly as saying, "I need to defecate, so I'll do it here and now, because this is what my body wants." This is how dogs behave, and cows and chickens. They are their body, and what their body wants determines their behavior. That's just fine for dogs and cows and chickens, but it's not what human behavior is all about, as human behavior is morally driven, not physically driven. Driven by thought and consideration for the larger picture and what compassion and love might mean. No guarantees, of course, that humans will make the right decision, but surrendering the responsibility of making decisions is an act that diminishes our humanity and only makes matters worse.

The fundamentalists have given over to the body, at least when it comes to conception and birth, absolute determination. Whatever happens physically is now the final reality to which we must now bow down, in some kind of a strange fertility cult. 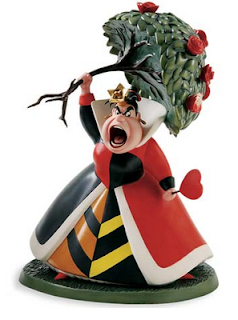 Fundamentalist pro-birthers have managed to box themselves in, with no way out. Hence, their agitation and bizarre statements about rape. In a world where logic and reason and compassion have been discarded, all that's left is the Queen of Hearts - "Off with their heads" - and a hellish world where nothing makes sense.

They're in a tough place, and they know it. They have no escape from their own pro-birth logic, and now with Obama's re-election, their prayers have failed to win their god's favor, or, the devil has somehow triumphed over their god, or, their god is submitting this nation to judgment by giving the devil free reign.

They are truly stuck in a strange and sad world.

Israel did not want to be a holy nation. Israel wanted to be a nation like all the other nations, a nation like Egypt, like Syria. She wanted clout. She wanted security. She wanted a place in the sun. It was her own way she wanted not God's way; and when the prophets got after her for it, she got rid of the prophets, and when God's demands seemed too exorbitant, God's promises too remote, she took up with all the other gods who still get our votes and our money and our 9 AM to 5 PM energies, because they are gods who could not care less whether we are holy or not, and promise absolutely everything we really want and absolutely nothing we really need. ~ Nov. 2 reading, Listening to Your Life - excerpted from The Clown in the Belfry.

The church in America is Ancient Israel all over again. We've sold our soul to the gods who promise us clout, security, and a place in the sun.

Gods who couldn't care less about our holiness and are more than happy when we substitute narrow-mindedness for faith, snottiness for discernment, and overly-scrupulous concerns for private/personal behavior - centered in the genitals - for the purposes of life given by Jesus in his hometown sermon.

We despise the prophets, like a Jeremiah Wright, who call our "greatness" to account, who reveal the false gods for what they are, who shine the light of grace on narrow-mindedness, snottiness and petty morality and dare to call down God's judgment upon us.

We preach health, wealth and happiness and are more than content to ignore the Prophets and turn Jesus into some kind of a mental-health guru who will turn us into business geniuses, transform our marriages, guide out children into prosperous careers, eliminate acne and dandruff, make our nation strong, feed our needs for oil, prevent global warming, trample our "enemies" and make us happy.

But the happiness never arrives.

We still have acne and dandruff.

And God still waits for us to hear his Son in the Nazareth Synagogue.

Posted by castaway at 6:58 AM No comments: