A Gun-Free Nation - We Could Do it!

We could create a gun-free nation quickly ... here's how, as I see it:

3) Hunters, duly verified and licensed, would be able to store hunting weapons at state gun-storage facilities, and borrow them as they would a library book. Hunters could go there to clean and inspect their weapons. All ammunition stored there, too.

4) Gun collectors would also store their guns in state facilities. Private collecting would diminish. If folks have a fascination with guns, go to the local museum.

5) Ban gun shows. Outlaw the NRA as a subversive organization advocating violence, as dangerous as any terrorist organization or group advocating the violent overthrow of the government.

6) No private manufacturing of guns - only produced by government agencies for police and armed forces.

1) The threat-level to our police would go down. Guns would virtually disappear from our streets.

2) People would still be violent, but gun violence would be down dramatically. The overwrought need that some folks feel to "protect" their home would no longer exist.

3) Accidental shootings would cease, and so would circumstantial suicide with a gun. No more children being killed or killing.

And our armed forces.

We could do this if we took seriously the times and age in which we live.

It's time to leave the 18th Century behind and move into the 21st as a leader of the civilized world.
Posted by castaway at 11:27 AM No comments:

The Ruling Class and a Weaponized Police Force

The Ruling Class has always relied

Upon a weaponized police force

To deal with agitators, 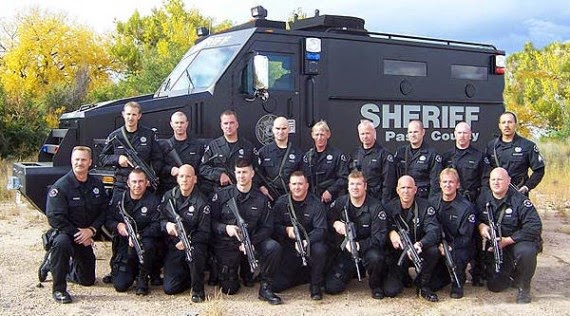 What better way for the

For the day when folks

Grow tired of being abused

And denied their rights.

Give 'em the latest in technology

To maim and kill brutally.

Call 'em out quickly if

The People cause trouble.

"We can't have any of this

Posted by castaway at 6:24 AM No comments:

Wealth and the Will of God

Wealth, like everything else in life, is a strange and mystifying combination of factors, very few of which have anything to do directly with "how good or skillful I am."

Christians have always rightly attributed wealth to divine favor - which led many to still think of themselves as "deserving" or at least "chums with God." Nevertheless, a sense of "divine favor" laid the responsibility for wealth at the feet of God rather than seeing it as a laurel wreath for the victor.

If God is responsible, then gratitude, even humility, is required, and its attendant social calling - compassion - and that is exactly the response shunned these days of finance-capitalism. Indeed, if I'm self-made, then I owe nothing to anyone except myself!
Posted by castaway at 6:22 AM No comments: